It’s the swinging sixties and a young man leaves behind a humdrum Northern life and heads for London. He lands smack dab in the middle of Carnaby Street. Within months he is in a band and a year later he’s invited to audition for Fairport Convention. He shares lead vocal duties first with Judy Dyble and then with Sandy Denny in perhaps the greatest line-up of that much loved band of folk-rock pioneers.

In 1970, he forms Matthews Southern Comfort and has an international hit with an arrangement of Joni Mitchell’s counter-culture classic ‘Woodstock’. With the ultimate earworm still high in the charts, Iain walks out on the band and after just a few months of reflection, releases the classic album If You Saw Thro’ My Eyes. Then with Andy Roberts, he puts together the highly revered Plainsong. They make just one LP, the critically acclaimed In Search of Amelia Earhart.  Iain then takes the opportunity to move to California to pursue an interest in the emerging West Coast singer-songwriter movement. He criss-crosses the States for the next thirty years, first as a major label artist, initially with Elektra and then Columbia, and eventually as a latter day troubadour with a guitar and a pickup truck.

Back in Europe since the turn of the millennium, Iain finally settles down with a wife and family but continues to pursue the muse.  Still possessed of one of the greatest male singing voices Britain ever produced, Matthews is now in his sixth decade as a professional musician. He has written a compelling memoir of a life on the road, in the studio and at home. It’s a story of music, journeys, life and what it does to us, through the eyes of one of our most enduring singer-songwriters.

I value the times Iain has been my fellow traveller in music. He is one of the great folk/rock/pop singers and writers, and his life and music trajectory have both been extraordinary … and he keeps getting better. Richard Thompson. OBE – Recording artist, Fairport Convention founding member

They say if you remember the sixties, you probably weren’t there. Iain Matthews was there and he remembers most of it. It’s wonderful to hear about it through his eyes. Better yet, he’s still around, writing and singing as well as he ever did. Cerys Matthews – Broadcaster and recording artist

Iain Matthews’s career has been a remarkable adventure, from Scunthorpe to Muswell Hill to ‘Woodstock’ to Texas to the Netherlands, making wonderful music at every stop. Joe Boyd – Author and record producer

Iain Matthews has been many things during his long and distinguished career; folk-rock pioneer, hitmaker, folk artist and songwriter among them. It has been my pleasure to have known and worked with him for half a century, and he’s still going strong. Long may he continue! Al Stewart – Songwriter and recording artist 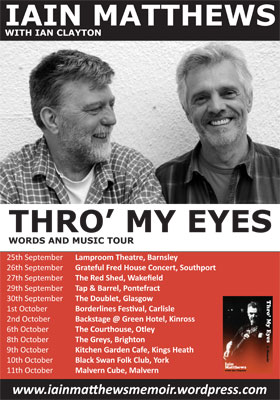 Iain and Ian take to the road this autumn for a UK Words and Music tour. More details here